Bodhidharma, the Founder of Zen Buddhism 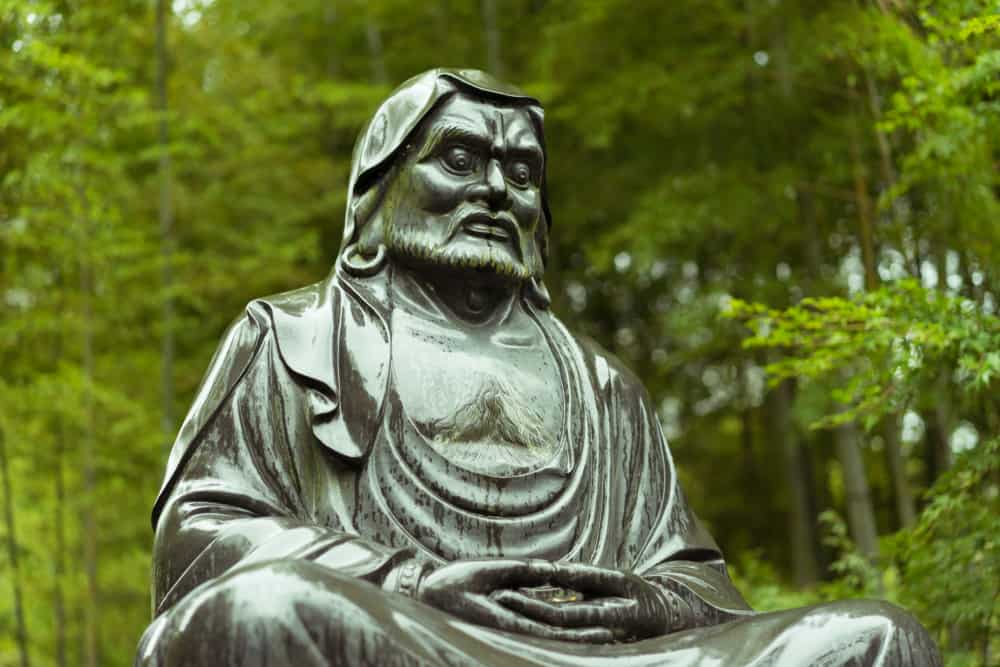 Not thinking about anything is Zen. Once you know this, walking, sitting, or lying down, everything is Zen - Bodhidharma

Often called the founder of Zen Buddhism, Bodhidharma, or Daruma as he is known in Japan, was a legendary, and semi-mythical Buddhist monk who lived during either the fifth or sixth century.

While historical records of his actual life are vague and often disputed, he is thought to have been born in either Persia or India, and after becoming a monk and entering the Buddhist order, later traveled to China.

As well as being the architect of Zen Buddhism, according to Chinese folklore and legend, Bodhidharma was also the creator of Shaolin Kung-Fu and was the first person to teach the train, and teach the disciples of the Shaolin monastery physical exercise and endurance which formed the basic building blocks and foundation of what would later become known as Kung-Fu, which when translated literally means “skillful endeavor”.

In the account that claims he came from India, that was originally authored by Tanlin in his introduction to The Two Entrances - the book based on the teachings of Bodhidharma that contain the founding principles of Zen Buddhism, Bodhidharma was supposedly the third son of a rich Indian merchant.

This merchant rejected the material path in favor of a more a spiritual one and a life devoted to knowledge and learning.

Even though little is known of his early life, Bodhodharma’s journey to China is thought to have been arduous and reportedly took three years.

Upon arriving in China, he is thought to have been so distressed by the poor physical condition of the Shaolin Monks that he encountered, that he insisted on teaching them techniques to improve their poor health and the importance of meditation to maintain spiritual and mental wellbeing.

His teachings later became the guiding principles of Shaolin Kung-Fu.

In the year five twenty-seven, Bodhidharma is widely thought to have met the Emperor Wu of Liang, a man who was passionate about the teaching of Buddhism and their discussion formed the first Koan, or story used to test a students devotion and progress in Zen Buddhism, of the Blue Cliff Record, which is a collection of koan’s (or stories) that is still widely used by practitioners of Zen.

The discussion is thought to have centered on the impermanence of the self, the importance of noble truth in Buddhism, and the meaning of karma and it’s spiritual and physical value.

While the stories of their encounter vary, the Emperor is thought to have been disappointed by Bodhidharma and what he viewed as the vagaries of his teachings, while Bodhidharma was said to have felt let down by the Emperor’s inability to grasp the ideas, knowledge, and concepts that he was trying to impart to him. After their initial meeting, the two men never saw each other again.

Staring At A Wall

One of the most enduring stories and legends about Bodhidharma revolves around the time he elected to become a hermit after being disheartened by the monks of South China and spending time in the Shaolin Temple.

Choosing to live in a cave near the temple, Bodhidharma spent nine years with his back to the cave entrance, staring at a wall and refusing to speak to, or entertain, anyone who visited him.

There are multiple different versions of the story about Bodhidharma’s time in the cave, but in the most popular he is said to have fallen asleep during the seventh year he spent staring at the wall. Enraged at himself, he is said to have cut off his eyelids to prevent it from happening again and when his eyelids fell to the floor, tea plants began to grow in the place where they fell.

This is thought to be the reason why Zen practitioners and students drink tea to keep themselves awake during the time they spend in zazen or seated meditation.

In another popular account of the story, Bodidharama’s legs are said to have withered and fallen off during the time he spent in meditation, which is why Daruma dolls, hollow red Japanese dolls that depict Bodhidharma have no legs.

In the final account of the story, Bodhidharma is said to have been taken from his cave by the monks from the nearby Shaolin temple and given shelter in their temple, where he then taught for a number of years, which is where the story of Kung Fu is thought to have originated.

In another of the popular legends that follow Bodhidharma’s time on Earth, he is said to have refused to take the Second Patriarch of Zen Buddhism, Dazu Huike, as his student until Huike cut off his left arm in order to prove his truthfulness and devotion to his would-be teacher.

In the later years of his life, Bodhidharma is said to have wished to return to India, and before he left he called his students and disciples together in order to ascertain who would replace him and carry on his teachings.

Of all his students, only Dazu Huike was considered worthy by his teacher and followed in Bodhidharma’s footsteps, becoming the second Patriarch of Zen Buddhism.

A number of years after he died, Bodhidharma was seen walking through the Pamir Mountains carrying a solitary shoe by Ambassador Song Yun of Liang.

When questioned about where he was going and why he was carrying a single shoe by the Ambassador, Bodhidharma replied “I am going home. When you reach the Shaolin Monastery, your question will be answered. Do not mention that you saw me or you will meet with disaster”

When Song Yun inevitably told the Emperor, he was informed that Bodhidharma has died three years previously and was accused of being a liar and was arrested by the Emperor. Upon finding out about Song Yun’s conversation with Bodhidharma, the Shaolin Monks dug up his grave and all they found in it was a single shoe. After prostrating themselves three times, they said:

“Master has gone back home. For nine years he remained and no-one knew him. Then with single shoe in hand, he went home, quietly and without ceremony”

What Is Zen Buddhism?

Zen is a school of Buddhism that originated in China, where it is known as Chan Buddhism. Zen is the Japanese translation of the Chinese word Chan which means “absorption” or “meditative state”.

The most basic, and easiest, way to describe Zen is that it is a school of Buddhism that revolves around mindfulness and mediation that is strongly influenced by Taoist philosophy.