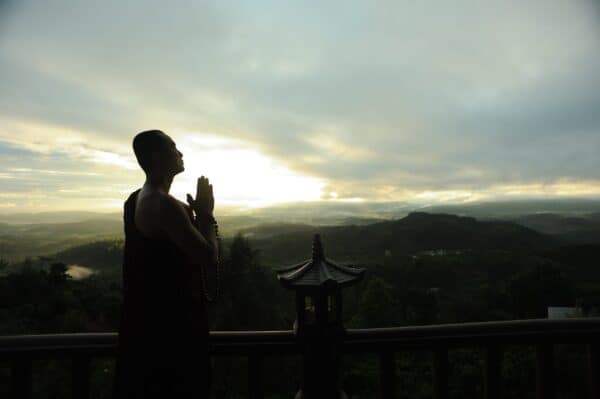 In Japanese Zen Buddhism Satori is described as a sudden moment of awakening or realization.

Linked to the experience of Kensho, or knowing one’s true self, Satori is directly linked with the Buddhist path to enlightenment.

The Zen Buddhist scholar D.T Suzuki (1870-1966) described Satori as ‘The acquiring of a new point of view in our dealings with life and the world’, concluding, ‘It is really another name for Enlightenment.’

While fellow scholar Dumoulin described Satori as a form of enlightenment that provides an ‘insight into the identity of one's own nature’ and ‘their relationship with all of reality’, or that of an ‘eternal now’, and ‘as a vision that removes all distinctions.’  He said: “This enlightenment is the center and the goal of the Zen way.”

Hakuin Ekaku (1686-1769), who introduced koan practice and meditation to Zen Buddhism,  preferred to see Satori as ‘seeing into one's nature’ or glimpsing an ultimate reality.

Contemporary Zen scholar, Peter Harvey said Satori ‘ is a blissful realization where a person's inner nature, the originally pure mind, is directly known as an illuminating emptiness, a thusness which is dynamic and immanent in the world.’

It is said that Buddha’s brother Ananda spent 40 years searching for Satori before finally reaching a state of Zen. this is not to say it will take 40 years to reach Satori, it is an experience that can come to you at any time.

Suzuki posits that Satori frees the mind of ego resulting in the ‘no mind’ where our true- self, and our innermost reality resides.

He said: “When one examines the Zen text attentively, one cannot escape the impression that, with all that is bizarre in it, satori is, in fact, a matter of natural occurrence, of something so very simple that one fails to see the wood for the trees, and in attempting to explain it, invariably says the very thing that drives others into the greatest confusion.”

In this way it is believed that Satori exists as a natural state within nature. Animals always are in a state of satori as they are from birth connected to the source and totally immersed in the present.

Humans, on the other hand, by becoming more complicated beings have lost this connection to the here and now.

How to Achieve Satori

To be part of any society it is accepted that we all adhere to a set way of perceiving the world.

This more often than not this is centered on a dualism that sets humans apart from nature.

For Zen Buddhists, this dualism is the root cause of humanity’s troubles, and by reaching Satori one can break free of these shackles and achieve a new point of view.

Zen Buddhists believe Satori exists just beneath the surface of human consciousness,  but society implants within our mind the notion that reaching satori is incredibly difficult or neigh on impossible.

Early Zen masters would practice for many years to break themselves of these restrictions and reach Satori. In order to pass these teachings onto future generations, they created Koans to help others find Satori.

Koans are questions that defy a rational answer, famous koans include “ If a tree falls in the woods does it make a sound?” and “What is the sound of one hand clapping?” Questions which could appear to have a simple answer if one is constrained in their understanding of the world around them, but can lead to a small glimpse of enlightenment when one relinquishes their preconceptions and allows themselves to return to their true self.

In his book, Introduction to  Zen Buddhism, D.T Suzuki described Koans as an anecdote told by an ancient master or a dialogue between a master and monks, or a question put forward by a teacher. This is used as a means for opening one’s mind to the truth of Zen.

Suzuki said: “If you have been in the habit of thinking logically according to the rules of dualism, rid yourself of it and you may come around to the viewpoint of zen.”

He said: ”That act is apparently alike to us both, but who can tell what a wide gap there is subjectively between your drinking and my drinking?

“In your drinking, there may be no Zen, while mine is brim-full of it.”

In short, the only difference between one who had witnessed satori and one who hasn’t is an insistence on thinking, and looking at the world in a logical manner.

For example, one who has not witnessed Satori would insist that when a tree falls in the woods it would indeed make a sound because logic would dictate that this is the case.

However, one who has glimpsed satori would be open to the notion that sound can only exist when there is someone there to hear it.

What Happens When You Glimpse Satori

When glimpsing satori Zen practitioners believe there is a moment of impersonal exaltation as for a moment the ego ceases to exist.

By freeing oneself from the suffrage of mundane thinking and logical thought, one experiences a feeling of elation.

However, Satori by its very nature is a state of mind which only lasts for a short time, an abrupt reconnection to the true self, a brief glimpse of enlightenment which may only last a few moments, or even days and then vanish.

As British Buddhist scholar Alan Watts (1915-1973) said: “When you attain Saori, nothing is left for you in that moment than to have a good laugh.”