Buddhism is the fourth largest religion in the world, with over 520 million followers globally.

It encompasses a myriad of traditions, beliefs, and spiritual practices taken from the original teachings of Buddha and the many philosophies that were interpreted from these.

A Time of Extremities

The time in which Buddha was alive was a time of extremities and ‘black and white’ living. People believed either in Eternalism - that all things were permanent - or Nihilism - that everything is temporary and will become extinct after death.

They also believed in living lives of extreme self-indulgence or extreme deprivation, either indulging completely in sensual pleasures or instead sacrificing materialism and self-indulgence to be granted benefits in the afterlife. Buddha realized that neither path was the way to live.

The Middle Way - also known as the Middle Path - was the term coined by Gautama Buddha to describe the nature of the Noble Eightfold Path. At its simplest, the Middle Way describes the Buddhist approach to life, where one must achieve balance between sensual indulgence and self-mortification. 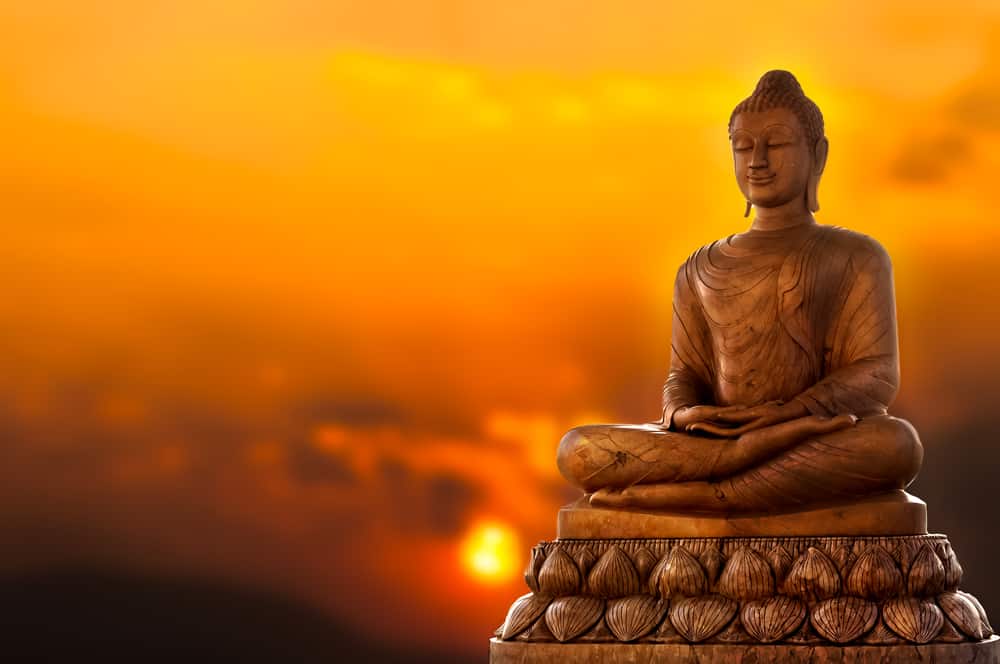 Context of the Middle Way

The Buddha was born a wealthy prince, driven in his life by pleasure-seeking and indulgence. After some time, he tired of the emptiness of materialism and started seeking a deeper truth. Instead, he found himself in extreme asceticism, not eating or sleeping, and ending up on the cusp of death.

He soon realized that this path was just as futile as the one of intense materialism, where his happiness was hinged entirely on belongings and sensual pleasures. Buddha began to meditate in a bid to discover the true meaning of life and instead found that the answer lay neither in deprivation nor luxury, but somewhere in the middle.

What is the Middle Way?

The Middle Way describes this path that is halfway between materialism and spiritualism. In his first sermon, the Buddha, having found fault within both extremes, shared his new-found wisdom of the Middle Way, along with the eightfold path, and its prescriptions for achieving balance.

When Buddha delivered the Dhammacakkappavattana Sutta after his awakening, he was addressing five ascetics whom he had previously practiced severe austerities with. This idea of opposing extremism stems from Buddha’s personal experience, as well as the broader context of Indian shamanic practices.

The Concept of Dependent Origination

Pali literature, which mainly covers Theravada Buddhism, also used the phrase Middle Way to refer to the Buddha's teaching of dependent origination as a view between the extremes of eternalism and annihilationism.

Dependent origination is based on the idea that the existence of objects and phenomena are the result of causes. When one of these causes changes or disappears, so does the resulting object or phenomena. It suggests that nothing has an eternal self and that everything is mutually dependent on origination and existence.

However, this should not be interpreted as meaning there is nothing at all, it instead is viewed as the Middle Way between eternalism and annihilationism, which understands the “person” as a result of causal connectedness.

Different Interpretations of the Middle Way

There are many different types of Buddhism, and as a result, the interpretations of the Middle Way differ slightly between these. For example, in Mahayana Buddhism, the Madhyamaka ("Middle Way") describes the midpoint between metaphysical claims that things ultimately either exist or do not exist.

While in Chan Buddhism, the Middle Way is the recognition that to be free from extremities we must understand that perspective is not objective reality, and we must free ourselves from one-sidedness. Underpinning all interpretations of the Middle Way is of course the quest for balance between two polar opposites.

How the Middle Way informs all of Buddhism

The Middle Way is not an isolated belief and instead is extended to Buddhism as a whole, even the more abstract concepts. A good example of this is that Buddha was once asked by a student whether or not the self exists, and instead of replying, he remained silent. Buddha later revealed that if he answered yes, he would have been guilty of eternalism, but if he replied no, he would have been nihilistic. While the silence appeared empty to his followers, it actually represented the Middle Way.

As Buddhism grew and developed, the concept of the Middle Way was extended to any dualism or dichotomy, such as subject/object, samsara/nirvana, part/whole. Several hundred years after Buddha existed, the Madhyamaka school was established and took its name from the Sanskrit term for middle path, madhyama-pratipad.

Nagarjuna, the school’s exemplar, later applied the path to existence and non-existence. He suggested that in between two opposites lies emptiness (sunyata), but that this should not be mistaken for nothingness. Rather, this emptiness - just like Buddha’s silence in front of the student - is alive with endless possibilities and potential.

What does the Middle Way mean in today’s society?

Finding the balance between the physical and the spiritual is intrinsic to the Middle Way. In today’s world, materialism has caused mass consumerism which in turn has created extreme environmental damage and a climate crisis.

The Western world is a place of spiritual barrenness with happiness viewed through belongings, money, and social standing. Yet the Middle Way doesn’t mean rejecting this entirely, because it accepts that to do this is overly idealistic, and anyone who voids himself of materialism completely will end up unable to live in the modern world.

The Middle Way is therefore somewhere in between, accepting the reality of materialism and consumerism but living with a consciousness of how this impacts the physical world, too.

In a society increasingly characterized by a polarized political climate, of far-right - far-left, capitalist-communist, could the Middle Way offer a viable path forward?