The Three Jewels Of Buddhism 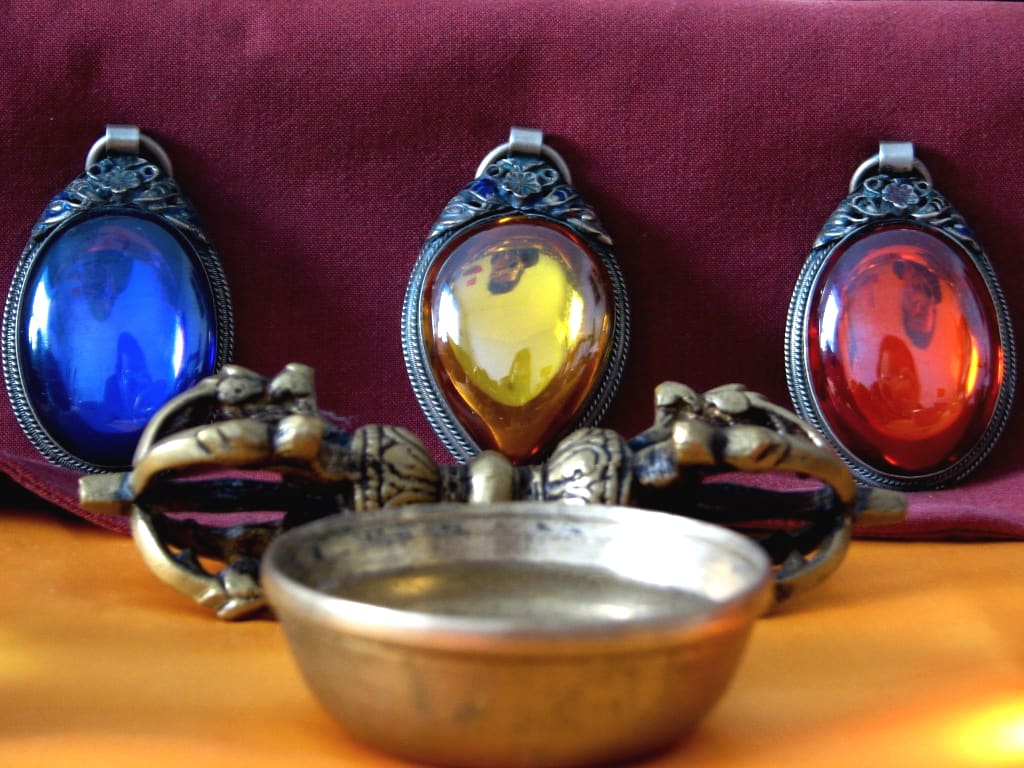 Fundamental to Buddhism are the ‘Three Jewels.’ Buddhist practitioners ‘take refuge’ in the three jewels of Buddhism to guide them towards enlightenment.

But what exactly are the Three Jewels?

The Three Jewels, also known as the Triratna, are the three main fundamental aspects of Buddhism. Buddhists ‘take refuge’ and guidance from the three jewels.

When entering the Buddhist faith, practitioners will often state the following:

Whereas many other faiths may turn to gods and worship them, Buddhists do not conduct ‘worship,’ but rather pay respect to different aspects of their faiths.

I Take Refuge in the Buddha

The very first of the Three Jewels of Buddhism is the Buddha. When you consider other forms of religious worship, this may seem like a fairly simple concept: you pay homage to the Buddha, the founder of Buddhism. While this may seem to be true on a surface level, in actuality it’s a lot more complicated than this.

To start with, the Buddha refers to the obvious answer: the historical Buddha who founded the religion. It is paying respect to the founder of Buddhism, Siddartha Gotama. It is a hope that other living beings will understand the way of life and the path to enlightenment as the Buddha was once said to have done. It is respecting him as an example and as a teacher.

With that being said, when you are taking refuge in the Buddha, you are not just hiding behind the safety of a mythical being that will solve all of your problems for you. As we have mentioned, it is about respecting the journey of the historical Buddha, and instead of relying upon him as a savior, we are instead recognizing the potential for Buddhahood within us.

Beyond the belief in the Buddha, certain Buddhist practitioners also look to other figures that are known as Bodhisattvas. These are essentially beings that are capable of reaching Nirvana but they choose to delay doing this in order to provide compassion to other living beings. It is a person that is on the route to Buddhahood. It may even be a normal person that has decided to move their life in the direction of the Buddha.

I Take Refuge in the Dharma

The Dharma or Dhamma refers to the teachings of the Buddha. The Dharma are the truths that Buddhists follow to lead them on their path to enlightenment, they are simply the way of truth.

The Dharma involves learning the teachings of the Buddha and then following those and applying them to the life that you lead. The teachings that should be followed can be the three marks of existence, the four noble truths, the eightfold path, teachings about karma and so many more. Many of these teachings have been around for thousands of years!

I Take Refuge in the Sangha

The Sangha has conventionally referred to the buddhist community, primarily the monastics and arhats that provide the example for Buddhist practice to the lay Buddhist community. Buddhist monks or arhats are referred to as Bhikkus (male) and bhikkhunis (female) and the practices for each community may differ slightly among different Buddhist groups.

In older teachings and in certain Theravada communities, the Sangha is only referring to bhikkhus and bhikkhunis, and other teachers that have been ordained to teach buddhism. However, in a lot of Western civilizations and the Mahayana tradition, the Sangha refers to everyone that practices Buddhism and all those that embrace the Dharma.

One common misconception about Buddhism is that it is a very introspective and solitary religion, designed only for single person practice. This is certainly not the case. The Buddha actually emphasised the importance of interacting with others that are on the same journey and path to enlightenment.

It can actually help to encourage practice, and fellow Buddhist practitioners can help each other on their paths to enlightenment. The journey is different for every person, but by taking refuge in the three jewels and understanding the key practices, practitioners are united as one.

As with the Four Noble Truths, the Three Jewels of Buddhism are thus essential to Buddhist practice and to becoming enlightened.

Each of the three jewels are fundamental to Buddhist practice. By taking refuge in the Buddha, the Dharma, and the Sangha, the Buddhist practitioner learns to understand themselves and the world at a deeper level.

Of course, the three elements all span a lot further than what we’ve covered here, but these are just the guiding principles behind the Three Jewels of Buddhism. By taking refuge and through persistent training, we can all hope to eventually become enlightened and reach nirvana.