One question which gets frequently asked is: “Do I really need a towel just for yoga?”

The answer to that is a brisk, flat, “Yes.” We’ll explain why shortly.

Following this, we’ll also address the question as to whether Manduka’s Yogitoes Non-Slip Yoga Towel is worth the investment for that single niche item. So as not to keep you in suspense, we’ll give you the short answer up front—Yes. In fact we’re quite enthusiastic about it, as you’ll see.

Just for a moment, let’s talk about yoga towels in general and why they’re a step up from repurposing one of your bathroom towels.

Whether you’re practicing the calmer variety of Hatha yoga, where your pulse barely moves into the cardio zone, or whether you’re living your best Vinyasa life, you want your towel to do four things:

Now, a standard towel could help you with the first two items on this yoga-mat function list, so long as:

Unless you have the linen cupboard of the heavens, you’ve probably spent north of $35 because you’ve had to buy a twin set of towels which meet these three parameters. For some reason known only to the world of linen retail, there seems to be some kind of immutable, international law against buying nice, non-yoga towels individually.

Anyway, even if you’re suitably furnished with a gorgeously soft towel, you’re still left with the problems that the towel will wrinkle underfoot, and that it will slip.

We really like the Yogitoes towel because it ticks so many boxes on our must-have list. You can lay it directly on the floor, but it’s designed to be used with a mat for that quarter inch of extra cushioning. Here are some of the aspects that we love.

The Non-Slip Grip that really Grips

The underside of the towel is coated in a grid pattern of small silicone dots an inch apart. This gives you robust and uniform grip across the base of the towel.

With all yoga towels, it’s recommended that you moisten them slightly at the start of the yoga session to assist suction and a smooth layer against the porous surface of the mat. As you perspire, the towel grows heavy and provides even better traction.

The Yogitoes towel is by no means exempt from this general practice, but it has an impressively strong grip right from the outset. If you’ve taken the time to moisten and smooth out your towel from the beginning, you don’t need to worry about it wrinkling under foot or bunching up and throwing you off-balance, either.

From the point that you’ve positioned the Yogitoes non-slip towel over your mat, it clings like a barnacle with abandonment issues. We cannot overstate how vital this quality is in a yoga towel.

You can injure your arm ligaments if you slip while moving from a sun salutation to a downward dog, which is a very gentle transition in posture. The injuries that could be caused if you skid while transitioning from a downward dog to a crow pose just don’t bear thinking about.

These silicone dots also pass the test of time, sustaining their grip even after hundreds of hours of hot (or fast) yoga and more spin cycles than you can count.

It’s not just the silicone nuggets, or indeed the adhesive material, which have a long operating lifespan. The towel’s hem is tightly serged, the thread staying put even after a 200-300 hundred washes. The printed patterns across the microfiber do show eventual signs of fade and thinness, but you would expect this after two or three years of twice-weekly service.

There are also very few entirely natural dyes (steering clear of lead, aromatic amines [azos] or other heavy metals) with that kind of resilience to extended exposure to gentle detergent.

That said, two-hundred-plus washes represents a respectable lifespan for any yoga towel used a couple times a week.

The microfiber forms a protective barrier between the surface of your yoga mat and the salt and oils released through sweat. While the moisture helps to create suction between the microfibers and the mat, the fabric wicks up the sweat and extends your mat’s lifetime.

In this respect, the Yogitoes towel performs exceptionally well. During an hour of hot yoga, you can lose up to 32 fluid ounces of water. It’s insane to think about the moisture loss in those terms.

Just imagine buying a 33floz/1-liter bottle of San Pellegrino and emptying all but the last ounce onto the floor. That’s the kind of moisture payload your towel can handle.

The microfiber is spun from recycled polyester and plastic materials, which accounts for much of its power to provide such a strong protective layer for your mat as well as provide such a ruggedly grippy surface for your posture.

It would be lovely to report that microfiber is made of entirely natural or man-made substances, but what Manduka is trying to do with their yoga range is combine maximum functionality (absorbency and grip) with beauty, through a manufacturing process which his has its roots in a deep belief for respecting the world in which they operate as well as having a deep respect for those who want to make the best of their yoga range.

Their products are as ecologically sound as they can be. Manduka recycles as much as possible. They take a continuous and direct interest in the welfare of those involved in the creation of their products. Their corporate policy is to donate a proportion of profit to human welfare charities each year. They have a clear and active corporate conscience which is lovely to see.

You’ll see a good selection of towels on Amazon, and more so on Manduka’s own site. However, you may find the more limited choice easier to shop from. The array of designs can make decision-making harder rather than opening your life to an array of artistic possibilities.

They provide towels in three sizes: a substantial 25x80”; 24x68” and a significantly more compact 17x26”. You can get all three sizes in a range of artistic designs from simple block colors to coastal vistas. Rolled up, you’re talking about a weight of 22 oz dry.

Though not slippery when wet, they do weigh a significant amount when loaded down with absorbed moisture. If you’ve already rammed spare shoes, shower towel and change of clothes in your bag as well as your yoga mat, then the weight can get a little oppressive.

This issue isn’t unique to the Yogitoes towel, but, along with the Yoga Jaci towel, it does come in generous mat-concealing sizes.

It would be nice if the mat came with a loose wet bag into which you could loosely contain your towel once used.

It would also be helpful for the towel to feature under-tuck corners (like a fitted sheet) so that you can use the tension of the fit around the mat to sustain that wrinkle-free surface instead of pre-loading it with moisture before you’ve even started your session.

A final item on our wish list which we can’t tick off quite so assuredly is that they’re fully committed to producing a hypoallergenic product.

Being fair, plastic-based materials pose very little allergy risk. Manduka is also very careful about sourcing their artistic dyes. That said, a little more specific information within their promotional material about their process for avoiding common allergens in the towels’ manufacturing process would be very welcome.

It’s clear to see that they have a great belief in the products that they sell, and we’re very happy with the durability of those towels—they’re a great investment—but a focus on the pragmatic specifics of how the towels are made (including a breakdown of their plastic composition) would be a welcome addition to the more expansive information about their values.

Overall, the drawbacks of the Yogitoes non-slip yoga towel are minor. It’s like deducting points for a nearly perfect pop quiz score because of an absent doodle scrawled into the corner of page 2, or because the student chose to give you a little too much historical information for the open question on page 5.

These towels are affordable but fall in the investment category for sure, as opposed to the multiple purchase category. That said, they are an investment for sure and will provide you with a soft and safe base from which to advance your yoga technique and achieve that sense of flow.

A long life and good retirement

These are some tips for expanding the lifespan of your towel.

Once you’ve decided that your towel has seen its best days, you can move it into the autumn of its life as a covering for a sun chair or lounger.

It is really nice to be able to relax without your weight tugging the towel down over your face as you sit, or without the towel bunching painfully into fat wrinkles the moment you dare to fidget. 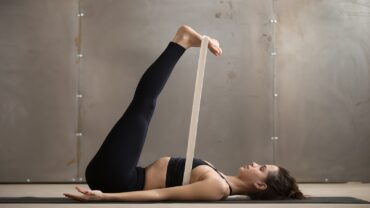