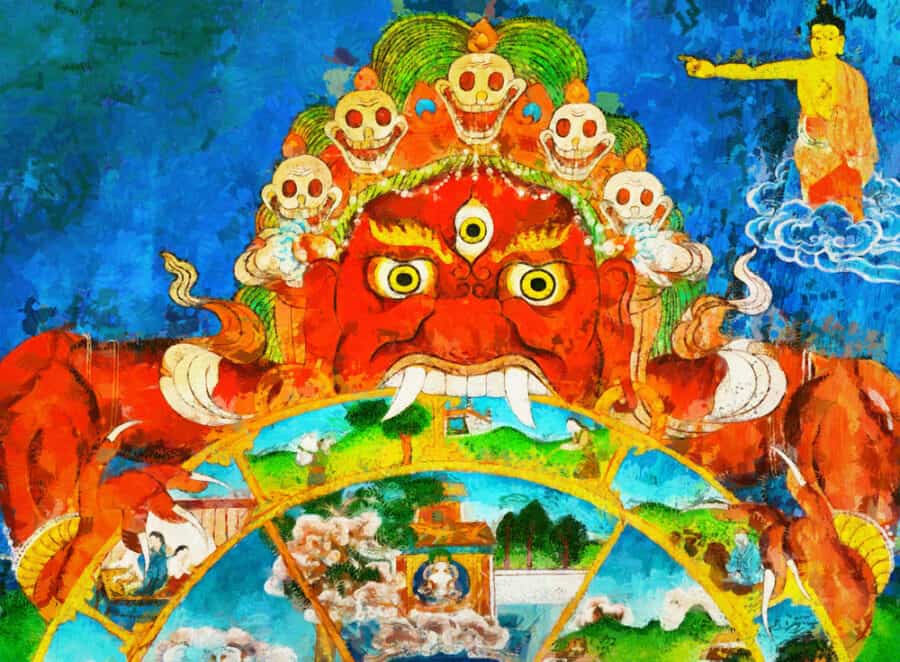 There are many concepts in the Buddhist religion that can sometimes be a little bit difficult to explain. High up on the list of tricky concepts is the concept of Samsara.

In Buddhism, the term Samsara refers to the continuous cycle of birth, existence and death. It is something that affects all living things - from plants, to animals and of course, to people. But what are the main ideas contained within this subject?

Samsara is a concept that closely ties in with another idea we’ve discussed here - The Four Noble Truths. To be specific, it ties in with the idea of Dukkha, also known as suffering. A reason why people suffer is because of the nature of permanence - everything is born, it lives a seemingly mundane existence, only then to die at the end of it all.

Samsara is translated from Sanskirt to mean ‘flowing on’ or ‘passing through.’ In Buddhism, the idea of Samsara is depicted in something known as the Wheel of Life and the Twelve Links of Dependent Origination.

It is important to clarify that while samsara does refer to becoming something else, rebirth isn’t strictly the same as reincarnation. Reincarnation requires the use of a soul, which isn’t something that exists in Buddhism. Buddhism believes instead in the idea that the mind and the body are reborn. It believes that karma moves on from one existence to another. It is the continuous cycle of karma that keeps us being reborn into different mental (or physical) planes of existence. This is said to contribute to dukkha, and the aim of Buddhism is to break free of this constant cycle of suffering.

Buddhists believe that by acknowledging the Four Noble Truths that you can get out of the constant cycle of rebirth, existence and death. This means that we see that we are causing our own samsara by generating certain types of karma, that we are able to stop making samsara and in order to stop we need to follow the Noble Eightfold Path.

After you have broken free of Samsara, you then reach Nirvana, a mental state where you are not affected by negative emotions. It is the true existence of happiness.

The Wheel of Life

As we’ve already discussed, Buddhists believe that Samsara links back to the three noble truths. In specific though, it also links to something called the three poisons. The three poisons are then represented by animals on the wheel of life.

The three poisons are:

The Worlds of Samsara

In Samsara, there are 6 different worlds. These are worlds that we cannot necessarily see, but they represent different states of consciousness. There are 6 worlds in total, categorised into upper and lower worlds.

The lower worlds consist of the world of the Animals, the Hungry Spirits and Hell. In these worlds, suffering is more common than happiness.

Here are all of these worlds, broken down.

The World of the Gods

This world consists of constant pleasure, and it is for the most part a happy existence. Unfortunately, everything must end eventually so when life in the world of the gods ends, they are rejected by their community and they see the world they are going to be reborn into. As you cannot go any higher than the world of the gods in the cycle of samsara, you will naturally be reborn into a lower world which causes suffering.

Usually, people that are consumed with pride in mass amounts and people that have big amounts of karma tend to be reborn into the world of the Gods.

World of The Titans

This world is associated with good karma and jealousy.

As it sounds, this is the world we live in, characterised with birth, ageing, sickness and deaths. This is the only world in which you can become enlightened. Desire is the primary emotion that influences rebirth in the human realm.

World of the Animals

The world of the animals is one of the lower plains of existence. This is characterised by cold, sickness, hunger, and more awful things. Creatures in this plane of existence are also not known for being too intelligent.

To be reborn in this world, you must generate negative karma in association with ignorance.

World of the Hungry Ghosts

World of the Damned

This is essentially the Buddhist equivalent to hell. Here, people suffer for extremely long durations of time, and they are tortured with fire and ice. This isn’t even the whole extent of the suffering.

In order to be reborn here your primary driving emotion must be hatred and you need to have generated negative karma.

In short, samsara refers to the Buddhist ideas of rebirth. By generating good karma and following the Four Noble Truths and the Noble Eightfold Path, we can be released from this continuous cycle of suffering and reach Nirvana - true enlightenment.